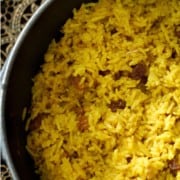 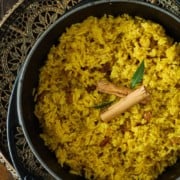 Say goodbye to bland, boring rice with this South African jewel of a recipe. Simple to make yet delivering an array of complex flavours and aromas that can be enjoyed with a multitude of dishes including curries and other meat and fish dishes. Most traditionally though, yellow basmati rice is served with Bobotie, South Africa’s national dish. This dish is radiantly yellow, buttery, sweet and sequined with sultanas.

What is the origin of Basmati yellow Rice?

Many countries like Spain, India, Indonesia and Sri Lanka have their own version of Yellow Rice. It’s simply white rice given a yellow tone with either turmeric, saffron or annatto and spiced according to local cuisine. In South Africa, Yellow Rice is a direct translation from the Afrikaans name ‘geelrys’ (geel=yellow, rys=rice) and is flavoured with turmeric, cinnamon and sultanas. This recipe also contains cardamom, which raises it to a whole new level of heavenly goodness.

Yellow Rice originates from the Cape Malay communities who found a home in Cape Town after they were tragically brought over as slaves in the 17th century. The Cape Malays are known for their fantastically aromatic, mildly spiced cuisine, often containing fruit. Yellow Rice is the epitome of this.

How to make this recipe:

What makes it yellow?

The colour is due to the addition of turmeric, which contains the bright yellow chemical Curcumin.

What goes with Basmati yellow rice?

Can you make this with brown rice?

Absolutely! Because brown rice takes a little longer to cook, cover the uncooked rice with boiling water for about an hour before cooking with the spices and other ingredients. This will soften the brown rice a little and give it a head start.

Can you make this vegan?

Yes! Just replace the butter with vegan-butter or coconut oil.

Is it easy to make?


It’s comically easy to make. Dump all the ingredients in a pot and cook – job done!

Is it expensive to make?


No, the main ingredient is rice with a few added spices and sultanas. It’s a cheap way to deliver a beautiful meal in a large quantity if you need to flesh out your main dish.

Can you freeze it?


Yes, you can freeze it. Reheat in the microwave and fluff up with a fork.

Is it very spicey?


No, this is a mild dish as it contains none of the ‘hot’ spices, only warm and earthy turmeric and cinnamon, plus cardamom for added aroma.

Anything else to know?

Many Yellow Rice recipes omit cardamom but I really feel this is an essential part of the aroma of the dish. Top tip – Don’t try to peel the pods with your nails to get the seeds out, place the whole seeds in your mortar and pestle and crack them, then remove the husks before grinding down the seeds. 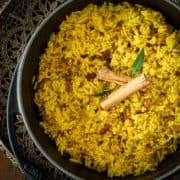 Equipment you may need

Hello! I'm Maretha, an avid foodie and constant student of gastronomy. My goal is to discover, develop and share scrumptious recipes with anyone willing to join me on this vast culinary adventure!

We use cookies on our website to give you the most relevant experience by remembering your preferences and repeat visits. By clicking “Accept”, you consent to the use of ALL the cookies.
Do not sell my personal information.
Cookie SettingsAccept
Manage consent

This website uses cookies to improve your experience while you navigate through the website. Out of these, the cookies that are categorized as necessary are stored on your browser as they are essential for the working of basic functionalities of the website. We also use third-party cookies that help us analyze and understand how you use this website. These cookies will be stored in your browser only with your consent. You also have the option to opt-out of these cookies. But opting out of some of these cookies may affect your browsing experience.
Necessary Always Enabled
Necessary cookies are absolutely essential for the website to function properly. These cookies ensure basic functionalities and security features of the website, anonymously.
Functional
Functional cookies help to perform certain functionalities like sharing the content of the website on social media platforms, collect feedbacks, and other third-party features.
Performance
Performance cookies are used to understand and analyze the key performance indexes of the website which helps in delivering a better user experience for the visitors.
Analytics
Analytical cookies are used to understand how visitors interact with the website. These cookies help provide information on metrics the number of visitors, bounce rate, traffic source, etc.
Advertisement
Advertisement cookies are used to provide visitors with relevant ads and marketing campaigns. These cookies track visitors across websites and collect information to provide customized ads.
Others
Other uncategorized cookies are those that are being analyzed and have not been classified into a category as yet.
SAVE & ACCEPT